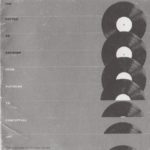 An exhibition catalogue published in conjunction with the show held at the Fort Worth Art Museum, Texas, December 4, 1977 – January 15, 1978. The exhibition, which also traveled to the Moore College of Art Gallery in Philadelphia, the Musée d’Art Contemporain in Montreal and the Museum of Contemporary Art, Chicago, featured artists’ records from the personal collection of Germano Celant (who had previously published a book with a similar title, in 1973: The Record as Artwork). Artists featured include Kurt Schwitters, Yves Klein, Allan Kaprow, Jan Dibbets, Sarkis, Topor, Jack Goldstein, Jean Tinguely, etc.. Includes a discography and a list of works.

A curator and dealer, Block is one of the leading authorities on the subject and was the proprietor of the artists’ record store in Berlin called Gelbe Musik. She is married to curator and publisher Rene Block.
The book is a compendium of artists’ record works, many of which are illustrated, and the volume also includes a chronology, bibliography, and a flexi-disk record by Czechoslovakian Fluxus artist (and progenitor of altered records in art) Milan Knízák. 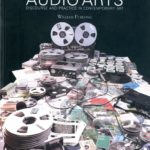 Audio Arts, the invention of two artists, William Furlong and Barry Barker, began in 1973 as the first art magazine to be published on audio cassette and is now a source of reference about contemporary art of the last 20 years. This volume features interviews, discussions, art-work documentation, reportage, archive recordings and artist collaborations with Audio Arts. 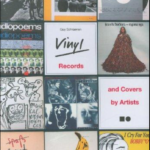 As creative talents began to design record sleeves, the standard 30 x 30 cm album cover came to be an especially attractive object. Now vinyl has an almost mythic character and real historical value. ‘Vinyl’ is a detailed catalog of the collection held by the Archive for Small Press and Communication in the Neues Museum Weserburg in Bremen, which includes not only records and CDs but also books, posters, and other objects.
In 2010 the collection Guy Schraenen was shown at the Maison Rouge, Paris. 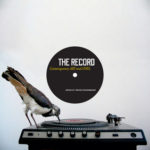 The Record is the catalog accompanying the exhibition The Record: Contemporary Art and Vinyl, curated by Trevor Schoonmaker at the Nasher Museum of Art at Duke University in 2010/2011. The exhibition explored the culture of vinyl records in the history of contemporary art. The Record features rarely exhibited work and recent and newly commissioned pieces by thirty-three artists from around the world. These artists have taken vinyl records as their subject or medium, producing sound work, sculpture, installation, drawing, painting, photography, video, and performance. 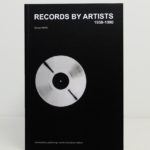 The catalog to an exhibition curated by Giorgio Maffei at the Biblioteca Universitaria, Bologna, during Artelibro 2013 explores diverse artistic experiences using sound and audio storage media since its beginnings around 1960. Central to the interdisciplinary context of dematerialization of the work of art, visual, literary, performance and other artists have increasingly experimented with the record and sound as a vehicle for investigating the possibilities of verbal and non-verbal expression, considerations of the body and avant-garde tendencies. Hundreds of examples are presented in this impressively researched and carefully documented and illustrated book. 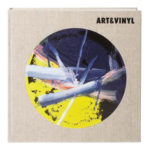 Art & Vinyl has been assembled over the course of nearly a decade by curator and collector Antoine de Beaupré, author of Total Records and founder of Librarie Galerie 213 in Paris.